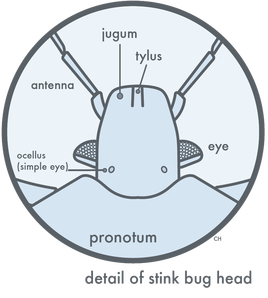 Stink bugs feed by inserting their long mouthparts, called a rostrum or beak, into their food. If feeding on plant sap or soft-bodied insects, they can simply suck out the liquid. If they are feeding on something solid, such as nut kernels or seeds, they inject enzymes that break down the protein into liquid so that they can inject it easily. Both of these types of feeding are likely to cause damage to the plants, and can be a concern to growers and gardeners, as the damage can affect appearance, taste, and plant health. It should be noted that most stink bugs in Oregon are not pests to be concerned about, because their populations do not get large enough to cause large amounts of damage to crops.

These are some common plants are attractive to many species of stink bugs throughout the spring and summer:
Watch a time-lapse video of Podisus feeding on a caterpillar.

When the weather warms in the spring and the days get longer, adult stink bugs come out of hibernation to feed, mate, and lay eggs. These adults will die a few weeks later, but their offspring will hatch and develop through the summer. Stink bug egg clusters can have seven to as many as  fty eggs, varying by species. After hatching, the young insects, called nymphs, go through  ve “instars”, or immature stages, before molting into a winged adult. The  rst instars generally remain on the egg cluster but later instars can be very mobile. The different stages can be distinguished by their relative size to one another and the development of the wing pads on the later instars. There is variation between species and some stages can be difficult to discern. Stink bug nymphs will always complete  five instars before molting into adult. 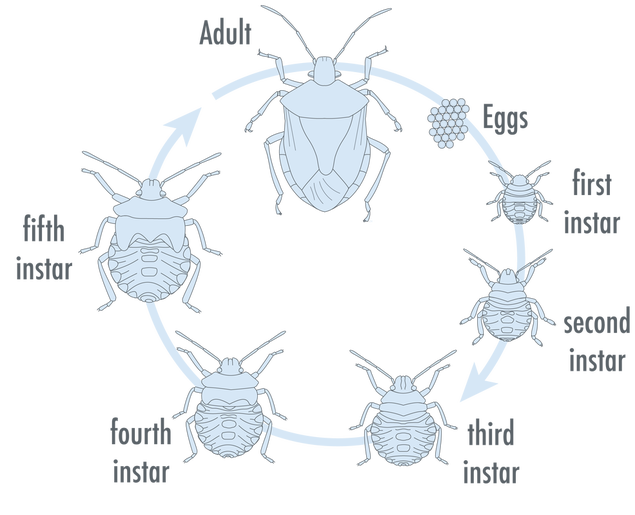 At the end of the summer, as days get cooler and shorter, adults will begin to move into hibernation areas and settle down for the winter. Most adult stink bugs spend the winter in leaf litter or under tree bark, but some, like the brown marmorated stink bug, will gather in structures. Some stink bugs are univoltine, or have a single generation per year, but others are multivoltine, completing two or three depending on summer conditions. (Image adapted from illustrations in The Developmental Stages of Some Species of the Japanese Pentatomoidea (Hemiptera), Kobayashi 1967).
Watch a time-lapse video of Brochymena emerging from eggs.
back to stink bug home
​